Back to Blog: Reports from the Rock
When the NBA Meets the PGA
By: Chris Brown 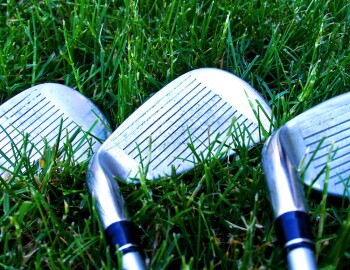 The Ellie Mae Classic is right around the corner, and the golf world is clamoring to get tickets and offer their two cents on who will come out with the illustrious win. OK – that’s not exactly true, in fact, many people even within the golf industry probably haven’t even heard of the Ellie Mae Classic, an event on the Web.com Tour played at TPC Stonebrae in California. So why is it even in the news?

Despite the tour’s noble purpose as a developmental system for the PGA, rarely does it see any media attention save for a few notable low scores or excellent shots. The Ellie Mae Classic, however, offers a unique story due to a star professional athlete throwing his hat into the ring – er, cup? Two-time NBA MVP and reigning NBA Champion Stephen Curry will be making his professional golf debut at this tournament, after receiving a sponsor exception for the Warriors Community Foundation.

Curry is an avid golfer and often spends his offseason on the links, playing in pro-am events and frequenting courses in his hometown of Charlotte, North Carolina. He holds a 2 handicap and has featured in a handful of videos testing his golf prowess, as well as appearing on Golf Channel’s “Feherty”. This is also not the first time a professional athlete has played in a Web.com Tour event either. NFL Hall of Famer Jerry Rice has also played in this same event, though he didn’t fare very well.

Regardless of his performance, his goal is simply to help raise money for the Warriors Community Foundation – but the sports world will undoubtedly be watching to see how he does. It is also refreshing to hear his comments about jumping into the golf world as a fellow professional athlete, and how difficult it is to play pro golf:

"When I found out I was getting a sponsor exemption, I had a lot of emotions because I love to play golf; it's a passion of mine. But to be able to play against the next and best golf professionals will be a huge honor and huge treat. I'm looking forward to hopefully not embarrassing myself, but mostly having a lot of fun and hopefully raising a lot of money for the foundation. ... I'm going to try to keep it in the fairway."

Could a golf career be around the corner? That remains to be seen. For now, let’s turn our attention to the Ellie Mae Classic to see what he can do, or not do, and hold judgment until after he quits his day job.